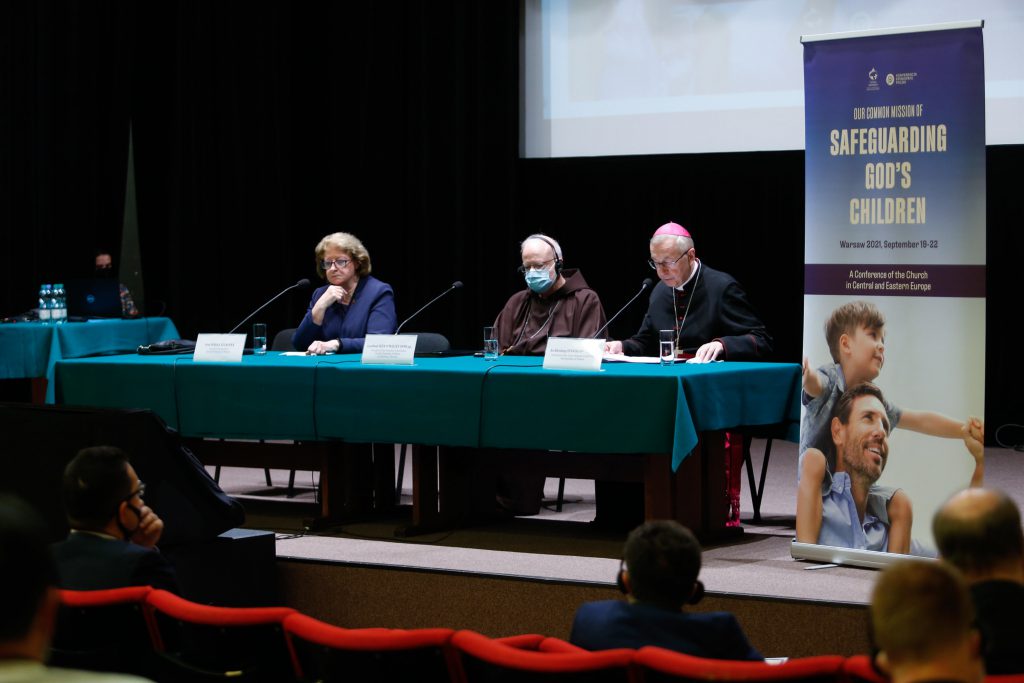 Address by Archbishop Stanisław Gądecki, President of the Polish Bishops’ Conference at the International Conference of the Church in Central and Eastern Europe “Our common mission of safeguarding God’s children” in Warsaw

At the beginning of our meeting, I would like to extend a warm welcome to all participants, starting with Cardinal O’ Malley and the commissioners of the Pontifical Commission for the Protection of Minors, who is the initiator and organiser of this important international conference. I warmly welcome the delegates of the friendly communities of the Roman and Greek Catholic Rite Church from Albania, Croatia, Slovenia, Hungary, Romania, Moldova, Bulgaria, Czech Republic, Slovakia, Ukraine, Russia, Estonia, Latvia, Lithuania, Belarus, Serbia, Montenegro, North Macedonia and Kosovo. Thank you for accepting the invitation and coming to Warsaw.

The motto of our conference Our common mission of safeguarding God’s children resonates deeply with the words of the Gospel that we heard in today’s Sunday liturgy. The Lord Jesus, after foretelling His Passion and emphasizing the value of humble service, He took a little child whom He placed among them. Taking the child in His arms, he said to them: ‘Whoever welcomes one of these little children in My name, welcomes Me; and whoever welcomes Me, does not welcome Me, but the One who sent me’ (Mark 9:36-37). Our Saviour is not afraid to embrace a child with His arms or, as others translate it, to “hug” the child. His gesture, however, is transparent, full of paternal tenderness, free from ambiguity. What is more, Christ identifies himself with the child, and welcomes the child with love as the way to welcome God himself. In the parallel passage of the Gospel according to St. Matthew, Jesus’ words read: unless you change and become like little children, you will never enter the kingdom of heaven. Therefore, whoever takes the lowly position of this child is the greatest in the kingdom of heaven. (Mt 18:3-4). Children, trusting and humble, are models of simplicity for all Christ’s disciples. But these qualities also make children vulnerable. And this is why Jesus warns: If anyone causes one of these little ones who believe in me to stumble, it would be better for them to have a large millstone hung around their neck and to be drowned in the depths of the sea. Woe to the world because of the things that cause people to stumble! Such things must come, but woe to the person through whom they come! (Mt 18:6-7). Our Lord uses very harsh words against the perpetrators of evil who harm children, but also against those who might disregard such harm: See that you do not despise one of these little ones. For I tell you that their angels in heaven always see the face of my Father in heaven. For the Son of Man came to seek and to save the lost. (Mt 18:10-11). We gather here to be healed of indifference, and even more so of disregard for injustice. We are called to see in everyone who has been wronged, the one whom we have to save, with Jesus. Let us feel sent, as angels to guard these little sisters and brothers.

When we speak of “safeguarding God’s children”, we do not limit this matter to children in the strict sense. We are also mindful of the young, but also of the slightly older, often vulnerable and manipulated. The Holy Father Francis stresses in the motu proprio Vos estis lux mundi that human and legal intervention is also required in the cases of abuse of power, deceit or coercion, also against adults. The Holy Father also reminds us that it is not only sexual abuse, but also abuse of power and of conscience. When I met with victims, I often heard stories in which the sexual abuse was preceded by manipulation, aimed at gaining unlimited trust, and therefore power over the life of a person who is defenceless against such manipulation. The perpetrator – unfortunately also a perpetrator in a cassock and a collar – not infrequently convinces the victim that what he is urging and coercing them to do is not in any way wrong, and is a right thing to do. In this way, sexual abuse is often linked to an abuse of power and of conscience, deepening the devastation that this crime wreaks not only in the psyche but also in the soul of the wounded person.

God’s children are therefore entrusted to our care and are to be welcomed, but also protected. In Poland we have been trying to act in this direction for years. The pioneer of this activity is the coordinator of the Polish Bishops’ Conference for The Protection of Children and Young People, appointed to this position by the Conference in 2013. A year later, together with Ms Ewa Kusz, who has great merits in this field, they founded the Child Protection Centre, which has been with us for seven years, inspiring multiple activities in the field of broadly understood prevention, as well as annually educating specialists in this field at postgraduate studies at the Ignacjanum Academy. It was they who proposed that every diocese and male religious congregation should have a delegate to make first contact with persons who have been abused and to receive their reports. Over the past seven years, the delegates have done a great deal of work to ensure that the abused persons – already often adult children of God – are welcomed and heard in the Church, and that the wrongdoing they experienced is judged according to the law. Following the publication of Pope Francis’ motu proprio Vos estis lux mundi, their role has increased even further. However, the legal dimension of the problem – although very important – is not sufficient. For this reason, every diocese and religious congregation has also appointed pastoral workers for the wounded persons – to provide spiritual care to those who wish it, so that the Church, wounded by crime, may also become the place of healing. Of course, the survivors are also offered psychological help, but we see that this drama also has a spiritual dimension. It has further been recognised that a clergyman accused of sexual abuse – even when already convicted – is often alone while awaiting the trial and sentence. Loneliness that breeds frustration is dangerous both for the accused or convicted cleric as well as for his potential victims. That is why we have created another function – that of a probation officer for the accused or convicted clergy, to supervise these people, to require them to keep to all the restrictions imposed, but also to support them in moments of depression or despair. In order not to focus only on intervention, but also on prevention, in each diocese there was also established a team responsible for this matter, made up of persons who carry out various tasks in different fields. In addition to the guidelines of the Polish Bishops’ Conference, the norms of good practice and prevention principles have been adopted in most dioceses and religious congregations. Finally, at the central level, we have seen that there is a need for a bishop, a shepherd, who will be a sign of the Church’s concern for the victims. Therefore, in 2019, the Primate of Poland, Archbishop Wojciech Polak was appointed the Bishops’ Conference delegate for the protection of children and young people, and his office was created at the Conference secretariat. The Polish bishops also decided to establish the Saint Joseph Foundation at the Bishops’ Conference, which for two years now has been allocating large financial resources for prevention and education, but also for helping the abused persons where for some reason the dioceses or religious congregations are unable to do so. In addition, lay persons have set up the “Wounded within the Church” initiative, which operates a helpline for persons who have been abused, as well as a team of therapists, lawyers and people of good will who are ready to support persons who have been wronged.

I mention these people and institutions to show the extent of the efforts of the Church in Poland, and also to thank those who have done much good in this area over the years. We take the call of the Holy Father Francis to heart, not to care primarily about the image of the institutions, about the “exterior of the cup and bowl”, but about the wellbeing of the victims. There is a danger that all these institutions and people involved will lull our sense of responsibility into a false impression that we are already doing so much. Meanwhile, coming into contact with the drama of the victims – which I was able to experience, personally listening to a number of people before the Vatican summit in 2019 – reveals that in the face of the enormity of the wounds and the great harm, many heroic efforts remain insufficient. New dramas are being uncovered, and the number of cases coming from our region to the Congregation for the Doctrine of the Faith in recent years has astonished even this experienced Institution.

In order to fruitfully and effectively protect God’s children and help the hurting ones, we must humbly acknowledge that our strength remains too weak. We also need to honestly acknowledge that we have made many mistakes and even neglected the persons who have been wounded in the Church. This facing of the truth should not, however, lead us to defeatism or despair. What is needed is the pastoral conversion of which Pope Francis speaks, a change of thinking and of action, where it becomes a priority to welcome the child, to safeguard the child, and to help the victims, a priority not only for selected individuals or institutions, but for each and every one of us. In today’s Gospel, the Lord points to an attitude of humble service to others, especially the small and vulnerable, as the royal path of His disciples. Moreover, today we have heard that it is through the cross and suffering that the Son of God will enter the glory of the resurrection. This paschal perspective should accompany us when we experience that the work ahead of us is beyond our strength. During the prayers for the victims that are periodically organised in Krakow, the Church contemplates the face of Jesus of Manopello, the face of the One at Passion and Resurrection. This brings hope to the wounded – and it may bring it to us, as well.

There is another motive for hope. It is our commitment as a whole community of the Church. We are here in communion with the Holy See, represented by Cardinal O’Malley and the Pontifical Commission, and in communion with many fraternal local Churches. We meet to share our experiences, but also to support each other on the path to the protection of God’s children, and to initiate the necessary cooperation. We are here as laity, consecrated persons, presbyters and bishops. Only in this way can we fruitfully and effectively undertake this important and so demanding task. Before we can give those who have been hurt the feeling that they are not abandoned, we need to experience this ourselves, as well. The Risen Lord and the community of His people are with us. We are not alone.

On the initiative of Pope Francis, we are living this year as one especially dedicated to St Joseph. He is a very important figure for us because he saved the Child Jesus and His Mother from mortal danger. St. John Paul II called St. Joseph the Protector and Defender. I am convinced that his powerful intercession accompanies us here, so that we, too, wherever the Lord places us, may become protectors and defenders of the weakest and the vulnerable.