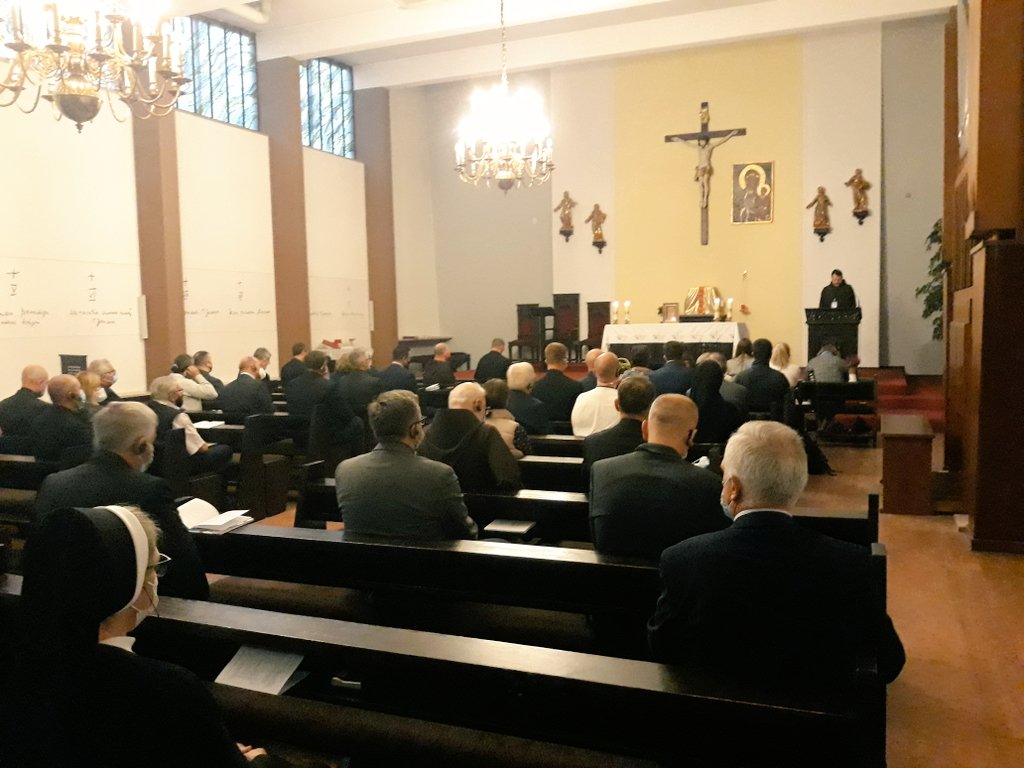 I am expected to give my testimony here. Well then, I’ll be talking about what I have experienced. However, in the beginning I  have to confess that I don’t like testifying. This reminds me my ordeal as a witness during the canon proceedings.

Today I testify as a victim. Nevertheless, during the canon proceedings my status was that of a witness, since the ecclesiastic law still fails to grant a special status to a sexually abused individual. My perpetrator was allowed to have his defenders, access the files and actively participate in the trial. As a witness I only had the right to tell the court what had had happened to me.

Only after the intervention of my congregation – after many years of the trial – was I allowed to seek for an attorney’s support. Apparently, I was granted this privilege as a consecrated person. Therefore, I felt embarrassed and sorry for other victims, as they still act as witnesses, and not a party to a lawsuit. Therefore, I do not like acting as a witness, because I have negative associations…

That happened in winter 1993, a few weeks after my 17th birthday. When I was expelled for my teenage naughtiness from a boarding house, I moved to the Albert Chmielowski Centre in Szczecin; it was founded by rev. Andrzej Dymer. As early as during the admission process, reverend Dymer told me to take off all my clothes; he claimed it was a standard hygiene inspection. He also stated that he was always examining the newly admitted boys in that way. Later I noticed that he used to come to our baths, and, standing in the doorway, observe the boys during their bath.

One day I took quite a big dose of medicaments. When I arrived in the centre, a bit intoxicated, the director sent for me – and it was about 10 pm. He was wearing pyjamas. He started to hug and kiss me. When he pushed me on his bed, he started to unbutton my clothes. And he did not stop at that point… I felt a kind of pressure of a blackmail, as I realised that I could be expelled from the Centre.

The next day I was talking about that situation with other boys. From my mates’ reactions I could see that they had experienced similar situations. Yet, when it turned out that I said something bad about the reverend director, the supervisors made me publicly apologise during breakfast. I was not able to say a word. Next day I had to pack my things and leave the Centre.

Luckily, reverend director gave me contact data of some parish. When I arrived there, I was given a place to sleep in a day care room by sister Miriam, an Egyptian, a consecrated virgin. She knew I was expelled from the Centre, but she did not ask any questions. I spent a few months under her custody. For me, it was the time of learning more about faith and prayer. I still remain in a close spiritual contact with sister Miriam.

Two years later I decided to join the Franciscan order. As a deacon I met sister Miriam again in 2002. On that occasion she asked me directly about my experience in the Centre because she had just learned about accusations towards reverend Dymer; as an American citizen she was fully aware of the distortion in Church caused by the scandals related to sexual abuse of minors. Later, sister Miriam had a chance to discuss my case with several bishops in Szczecin – however, with no results.

In June 2003 (right after I was ordained a priest), I was approached by a Dominican, Marcin Mogielski. His brother was one of the supervisors in the Centre – he was among those who were expelling me (having apologised later, he was also the first to report the wrongdoings of the reverend director, back in 1995). Father Marcin decided to collect the testimonies of those harmed by reverend Dymer and submit them to the church authorities. He persuaded me that it was worth doing with the aim of protecting others from our perpetrator, whose career was developing in the meantime position. I believed in ecclesiastical justice.

When I was testifying in Szczecin during the canon trial, a young priest – the notary raised his eyebrows, while recording my words. “And you still decided to become a priest after all that story?,” he asked me later. Yes, I did; and I have the feeling that it was the right decision. And God helped me.

I gave that testimony in 2004. The reaction was silence. An absolute standstill. I kept asking, but I never got any information about the course of action.

In the Year of Mercy (i.e., in 2016) I was appointed by the Holy Father a missionary of mercy. I still have this competence. It is particularly important for me to serve as an intermediary of mercy for other people. At the same time, however, I realised very clearly how much justice is indispensable for mercy, how justice is the basis of mercy.

I realised it even more clearly when in 2019 the perpetrator sued me in a public court. He accused me of … a libel. Allegedly, I committed it in 2017, when writing an internal letter to my provincial, where I asked for legal and canon help, revealing the culprit’s name. For me, that lawsuit was an unimaginable and absurd reversion of good and bad.

The currently acting archbishop of Szczecin, Andrzej Dzięga, was fully aware of the allegation, with no reaction on his part though. Also, he was strongly supporting my wrongdoer, assigning important projects to him on behalf of the archdiocese. Moreover, in 2017, when the ceremony of blessing a hospital, newly renovated by reverend Dymer, was planned, the archbishop invited the prefect of the Congregation for the Doctrine of the Faith; the Congregation at that time was conducting canon penal proceedings against reverend Dymer. However, in the very last moment, after his arrival in Poland cardinal Gerhard Ludwig Müller cancelled his participation in the ceremony.

When I turned 45, I realised that most of my life was overshadowed by my teenage trauma. I have been living with this stigma for nearly 30 years. The hearings were conducted for a dozen of years, there were numerous summonses, meetings, investigations, proceedings – and each of those occasions meant another act of humiliation for me… Once I compulsively put all the court correspondence in a shredder, I could not stand it anymore.

Finally, I decided to leave this shadow. If the church I serve has not been able to do justice, then justice needs to be done with the help of alternative means.

In the past I was refusing anyone encouraging me to speak about that matter on the media. I entrusted and hoped for the ecclesiastical justice. In 2020 for the first time I openly told my story to Zbigniew Nosowski, a recognised catholic journalist. On the Więź.pl portal he was publishing a series of reportages, so rightly and meaningfully entitled “We wait it out and ask you for waiting”[1].

Mr. Nosowski found and published the sentence pronounced in the court of the first instance back in 2008. It turned out that the tribunal in Szczecin found the defendant guilty, however, the sanctions were rather symbolic, insignificant. It was also found out that reverend Dymer appealed, and the Congregation of the Doctrine of Faith assigned the diocese of Gdańsk to conduct the second instance trial. Regrettably, archbishop Sławoj Leszek Głódź, the metropolitan bishop of Gdańsk, for over 9 years failed to even initiate the proceedings. Only five days after publishing Mr. Nosowski’s first reportage, which revealed these facts, the church tribunal in Gdańsk finalised the evidence investigation in the second instance court proceedings.

Three months later my face and my story were published in Sebastian Wasilewski’s TV reportage titled “The longest church trial.” I was really surprised that a public television reporter decided to open his material with my reading of the long vision of Saint Faustyna Kowalska about Jesus abandoning congregations and churches.

Shortly before broadcasting this reportage archbishop Dzięga dismissed reverend Dymer from his responsibilities. A few days later reverend Dymer died. The day after his death, it was revealed that the final sentence of the church court was pronounced five days before.

However, the content of the sentence is only known by a very limited group of entrusted persons. Obviously, I do not belong to this group. In the eyes of the church, a witness does not deserve the informaton about the sentence in force. I applied for informing me about the sentence to the new metropolitan bishops of Gdańsk and Szczecin. They replied that the decision concerning the disclosure of the sentence has to be made by the Holy See. And the Vatican is far away…

It has been nearly 29 years since my trauma. My first attempts to investigate and clarify the case started 26 years ago. The penal canon trial lasted for 17 years. The final canon sentence was pronounced over 6 months ago. The sentence was pronounced, but not published. Consequently, until now the church has failed to officially confirm neither my harm nor the perpetrator’s guilt.

Over all those years there were three bishops serving in Szczecin. None of them has ever invited me to see him.

Today I am talking about my experience during an international conference organised by the Pontifical Commission for the Protection of Minors. To my mind, this invitation is a kind of unofficial acknowledgement of the harm I suffered. However, is it possible my Church, our Church, the Church of Jesus Christ explicitly and publicly reveal the sentence of the longest canon trial? If we are not able to officially recognise and tell the truth, then how can we trustworthily proclaim Jesus – the Way, Truth and Life?

Also, it should be noted that the failure to publish the sentence means the freedom of pronouncing any accusation. In “Nasz Dziennik”, apparently a Polish strictly catholic magazine, the allegations against me were published – I was called as a liar, who has connections with some homosexual lobby… My response to these accusations, however, was never published.

Today, after revealing my story under my name, I have been acting as an important reference for individuals, who have suffered different harms within the Church community. The experiences entrusted to me are absolutely frightening. I wish I did not have to listen to the stories of so deeply abused and harmed men and women.

And my even stronger wish is to tell them that it is true that they were so severely and instrumentally treated, so abused in the past, but in the modern church they will be treated with the deepest care and respect. Regrettably, my personal experience does not allow for this statement.

There have been many changes introduced within the church, however, prioritising the victims occurs only verbally, not in reality. And yet, we cannot speak of the real good of the church, if there are still lies and the tendency to protect the perpetrators, where the victims are not respected. The harm done to the victims was in fact done to our God, in whom we believe.

[1] The title refers to the famous Reconciliation Letter of the Polish Bishops to the German bishops (1965), entitled shortly “We forgive and ask for forgiveness” (see: https://en.wikipedia.org/wiki/Letter_of_Reconciliation_of_the_Polish_Bishops_to_the_German_Bishops, https://polishfreedom.pl/en/document/letter-of-polish-bishops-to-german-bishops [translator’s note]