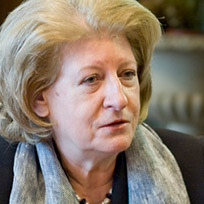 Professor of Constitutional Law and specialist in human rights at the University of Poznan, former Prime Minister of the Republic of Poland (1992-1993), Minister of Justice and Attorney General of the Republic of Poland (1997-2000) and Ambassador of Poland to the Holy See (2001-2013). She has received honorary degrees from the Pontifical Institute for Marriage and Family at the Lateran University, Cardinal Wyszynski University in Warsaw, and John Paul University in Krakow. Among many awards, Prof. Suchocka has received the Max Schmidheimy Stiftung Peace Prize and the Gold Medal of the “Jean Monnet” Foundation (Lausanne) for her activity in favor of integration and human rights. In 2018, Pope Francis appointed Professor Suchocka for a second term to the Pontifical Commission for the Protection of Minors.