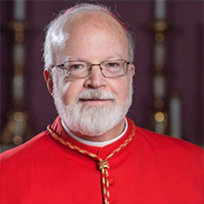 Cardinal Seán Patrick O’Malley, O.F.M. Cap., was professed as a Capuchin Franciscan in 1965 and ordained a priest in 1970. He earned a Ph.D. in Spanish and Portuguese literature from The Catholic University of America, where he taught from 1969 to 1973. Cardinal O’Malley founded Centro Catolico Hispano (Hispanic Catholic Center), an organization that assists immigrants. He was named bishop of the Diocese of St. Thomas in the Virgin Islands in 1985, of the Diocese of Fall River, Mass., in 1992, of Palm Beach, Fla. in 2002 and Archbishop of Boston in 2003. He was created a cardinal by Pope Benedict XVI in March, 2006. Cardinal O’Malley serves on the United States Conference of Catholic Bishops Committee for Pro-Life Activities, the Subcommittee for the Church in Africa and the Subcommittee for the Church in Latin America. Also, Cardinal O’Malley is a member of the Board of Trustees of The Catholic University of America. In 2010, Pope Benedict appointed Cardinal O’Malley as Apostolic Visitator for the Archdiocese of Dublin. Pope Francis appointed Cardinal O’Malley to the Council of Cardinals in 2013, nominated him President of the Pontifical Commission for the Protection of Minors in 2014, and nominated him Member of the Congregation for the Doctrine of the Faith in 2017. Cardinal O’Malley was elected Chairman of the Papal Foundation in 2018.