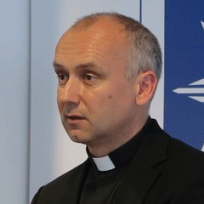 A priest of the Đakovo-Osijek Archdiocese, psychologist and psychotherapist, assistant professor at the Catholic Theological Faculty in Đakovo, and the Catholic University of Croatia in Zagreb. Bošnjaković has been dealing with the topic of sexual abuse for the last 15 years. He has published several scientific papers in Croatian on topics such as Giving a voice to minors who have suffered sexual abuse “within the Church” (2012), The power of the spirituality of sexually abused people. Forward you who are abused because the kingdom of heaven belongs to you (2020), A reflection and echo of the protection and safer future of the child in the light of the Panama and Rome Declarations (2021). Bošnjaković has participated in several international conferences on sexual abuse as a lecturer (Ljubljana, 2020; Krk-Malinska, 2019; Zagreb, 2019; Luxembourg-Trier, 2015) or as a listener (Vienna, 2019; Rome, 2017; Rome, 2010). Together with Marina Šijaković, he had several lectures and workshops for priests and theologians in Croatia and Bosnia, and Herzegovina on the topic of sexual abuse. As a psychotherapist, Bošnjaković works with victims/survivors and perpetrators of abuse. Bošnjaković has participated on several radio stations and TV shows working to popularize the importance of abuse prevention. Coordinator of the Second International Conference Formation and Formation Power as Service (Zagreb, 2019). Research associate and supervisor of the Center for Fostering the Wellbeing of Vulnerable Persons at the Croatian Catholic University in Zagreb. Bošnjaković is a member of the Commission for the Protection of Minors and Vulnerable Persons at the Catholic Bishops Conference and the Head of the Metropolitan Office of the Đakovo-Osijek Church Province for the Protection of Minors and Vulnerable Persons.