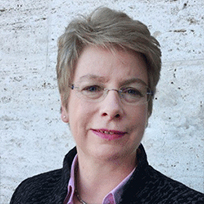 Myriam Wijlens obtained a licenciate in Catholic Theology at the Catholic University of Nijmegen (The Netherlands) in 1986. Subsequently she studied canon law at Saint Paul University, Ottawa and at the University of Ottawa (degrees: Master and Licentiate, 1988; PhD and Doctor of Canon Law (JCD) 1990). 1997 she completed the habilitation at the Westfälische-Wilhelms-Universität Münster. After visiting professorships at The Catholic University of America (Washington DC) from 2001-2003 and Saint Paul University in Ottawa from 2004-2006, as well as being an assistant professor at the University of Tilburg (1999-2005), Myriam Wijlens was appointed as full professor for Canon Law at the University of Erfurt in 2005. From 2008 till 2011 she served as vice president of the University of Erfurt. The Pontifical Council for the Promotion of Christian Unity (Vatican) appointed her as its delegate to the Standing Commission of Faith and Order at the World Council of Churches (Geneva) in 2008. In 2014 the delegation was renewed till 2022. In 2012 the same Pontifical Council mandated Myriam Wijlens to serve on the Consultation between the Roman Catholic Church and the Community of Protestant Churches in Europe. The University of Durham (UK) appointed her as hononary professor for Ecumenism and Canon Law from 2012-2018. Since 2004 Myriam Wijlens is co-moderator of the international research group Peter and Paul Seminar. In 2018, Pope Francis appointed Prof. Wijlens member of the Pontifical Commission for the Protection of Minors, where she leads the group focused on canonical and civil guidelines and norms. In 2021 the Holy Father appointed her consultor to the Synod of Bishops for the upcoming Synod on Synodality. Myriam Wijlens focuses on ecclesiological and ecumenical themes with a particular attention for canonical issues. Other areas of research concern sexual abuse of minors and the law on consecrated life in religious institutes. Myriam Wijlens offers in particular courses on the foundation of canon law (incl. General norms), the sanctifying office of the church, the Constitution of the Church and contemporary issues in canon law. In the Studium Fundamentale she offers interdisciplinary courses (e.g. “Church and State in Europe”, “The Well Being of Children: Rights – Protection – Promotion” and “Sexual Abuse of Minors in Institutions: Law – Causes – Prevention”).

The crises caused by disclosures of sexual abuse of minors by clergy reveals two stages in most local churches around the world: first, there is the growing awareness that clergy have abused minors. Children are deprived not only of their dignity and sexual integrity, but often times for the rest of their life they are also deeply wounded in their Christian faith. Later it becomes clear that the leadership of the church has severely failed in their response to reported allegations. They focused on the reputation of the church, rather than on protecting the minors. The trust placed in them by the faith community as well as society is severely shaken and leading to a lack of moral authority. Pope Francis has determined that if bishops fail in their task, they shall be held accountable. The crises calls for a theological and canonical reflection on the diocesan bishop’s responsibility to provide prevention, intervention, justice and healing.