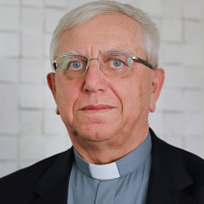 He graduated in philosophy in Krakow, Munich and Rome, and in theology in Naples. In the years 1990-1994 he was the rector of the Jesuit College in Krakow, in the years 1996-2002 he was the superior of the Southern Poland Province of the Society of Jesus. From September 2003, he worked in the Jesuit Roman Curia, where he was the general consultor and regional assistant for Eastern Europe. In 2008, he became the first assistant to the newly created Assistance for Central and Eastern Europe. In 2012, he finished his work in Rome. In 2013, he was appointed by the Polish Bishops’ Conference as a Coordinator for the Protection of Children and Youth at the Polish Bishops’ Conference, creating from scratch the structures of protecting children and youth in Poland. In 2014, he initiated the Child Protection Center at the Ignatianum Academy in Krakow, of which he became its director. In 2014, he co-organized the first international conference on sexual abuse in Poland. He has conducted over 100 trainings on the protection of children and youth in Poland and other countries. He is an active participant in the debate on the protection of minors in the Church and society. As the director of the CPC, he is responsible for postgraduate studies in the prevention of sexual violence against children and adolescents, where he works also as a lecturer.